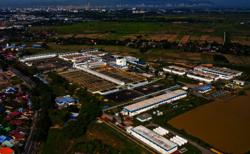 Wiped out: Customers greeted by empty shelves at a supermarket in Penang as they scramble to stock up on bottled water.

GEORGE TOWN: After a four-hour shutdown of the Sungai Dua Water Treatment Plant (WTP) caused by turbidity in the Sungai Muda river due to the floods in Baling, the state is turning to the Mengkuang Dam for its urgent water supply.

Raw water stored in the dam has been released to reduce the turbidity of the raw water in the Sungai Dua canal after the flash floods in Kedah, said Penang Water Supply Corporation (PBAPP) chief executive officer Datuk Jaseni Maidinsa.

The treatment plant, which supplies water to 85% of Penang users, was closed at about 11am and reopened only at 3pm when the turbidity level of the raw water entering the plant was at an acceptable level. However, it is only expected to operate at full capacity at about noon today.

The shutdown left many households without water. Thousands rushed to shops and supermarkets in a mad scramble to buy bottled water.

Sundry shops and supermarkets were full of people buying cartons of drinking water, causing congestion at the cashiers.

Businessman Richard Tan, 66, said he bought two cartons of drinking water after returning to dry taps at his office in Lebuh Macallum.

“Everyone is talking about the water disruption and it is better that I stock up for an emergency.

“They won’t go to waste. Even if supply is back, we can still consume the water later,” he said.

Housewife Nur Aisyah Ahmad, 36, said she was told of the water cut at her workplace and joined the crowd to stock up.

“It sounded serious. Water disruption usually only occurs within an area but now it is reported in so many places.

“It is a hassle without water, especially for those with children at home,” she said while pushing a cart full of bottled water.

Many other shoppers who bought water shared similar sentiments of being safe rather than sorry.

Penang Chief Minister Chow Kon Yeow said the turbidity level of raw water from Sungai Muda was too high due to the flash floods in Baling, Kedah.

He said the Mengkuang Dam could act as a reserve and provide clean raw water during a crisis like this.

“Penang draws 85% of its raw water from Sungai Muda, while the Ayer Itam Dam and Teluk Bahang Dam supply about 15% of raw water.

Chow said the water in Mengkuang Dam could last for about 100 days even if there is no other water supply.

Jaseni, meanwhile, said PBAPP would continue to monitor the turbidity of water abstracted from Sungai Muda.

“We will draw down water from the Mengkuang Dam to ensure safe raw water turbidity levels for the Sungai Dua WTP.” 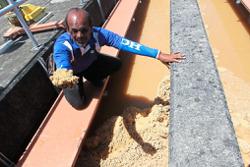