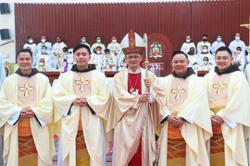 KOTA KINABALU: A group of four Kadazandusun men created history for their community as well as the local church here when they were ordained as priests at the same time on Saturday (July 2).

Cosmas Francis, Gerald Terence Saimel, Crispus Mosinoh and Sixtus Pitah Amit - all friars from the Catholic Church’s Franciscan order - took their vocations as priests before their proud family members and the faithful at the Sacred Heart Cathedral here.

The ceremony was celebrated by the Most Reverend Datuk John Wong Soo Kau, the Archbishop of the Kota Kinabalu Archdiocese.

This group of relatively young men all had promising careers before joining the Order of Friars Minor (OFM), a mendicant religious order.

Cosmas, the eldest of the lot at 47, was previously in the hospitality line while Gerald, 35, who has a masters degree in counselling psychology, had worked as a tutor at Universiti Malaysia Sabah and also served as a professional counsellor at the Sacred Heart Cathedral.

Meanwhile, Crispus, 36, and Sixtus, 35, were both English teachers, having taught in Sabah’s east coast Beluran and Sandakan districts respectively before they answered their vocation.

All four had gone through their formation for eight years in Singapore, attending the St Francis Xavier Major Seminary there.

“Yes, it’s a historical moment for us because it’s not often that four Sabahans are ordained as priests simultaneously, and all are from the OFM,” said Gerald.

“We are of course very grateful because it was a long journey - it took us eight years just to finish our formation and come back as priests. Personally, I am excited but also a bit nervous,” he added.

Gerald said he had journeyed with the order since he was 19 but only decided to join the Franciscan Order of the Custody of St Anthony in Malaysia, Singapore and Brunei in 2014 when he was 27.

He recalled that he cried when he made the decision as he had just received news that he got a job as a psychologist at a government hospital.

“I was caught between two minds - my vocation or career. But looking back, it has been a blessing,” he said.

Gerald and Cosmas took their final vows as friars, known in the church as a Solemn Profession, in Singapore last year which afforded them the title as religious brothers.

Crispus and Sixtus took theirs in 2020.

After their priestly ordination, which now makes them Friar Priests, all four will continue serving in the respective parishes within Sabah and other parts of Malaysia they were earlier assigned to, at least until the end of the year.

But because the Franciscans are an international order, Gerald said they can be sent practically anywhere in Malaysia or around the world to serve.

Cosmas said although they were now ordained priests, their first calling however was to be a religious brother.

He said that there were only 11 Friars from Sabah, with only five ordained as priests before the four of them.

Gerald explained that as friars, their calling was to live out their vows which were chastity, obedience and trying to live their lives in a simple way.

“People always confuse us with living in poverty but it’s not. Our vow is actually ‘nothing on my own’ which means people can give you material things but they do not belong to us.

“We share among ourselves and the people. For instance, if I have money I will share with the people because it’s not mine,” he said. 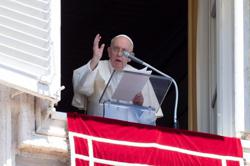