IPOH: Four people sustained minor injuries when an express bus hit the barrier of a toll booth at the Jelapang exit of the North-South Expressway.

A spokesman for the Perak Fire and Rescue Department said they received a call on the incident at 3.08pm on Monday (June 20).

He said there were 16 passengers in the bus when the incident occurred.

"The bus from the north was exiting the Jelapang exit to go to the Amanjaya Bus Terminal here when the accident happened.

"The injured were taken to hospital for treatment," he said. 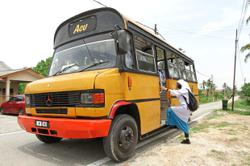