Najib also questioned whether Muhyiddin's denial meant that he did not succeed in obtaining the needed majority to be the premier again.

He then dared Muhyiddin to prove that he had the support to be the prime minister again.

"You might not get 119 now, but try to push the button," said Najib, referring to Shafie's allegation that Muhyiddin claimed to have had the backing of 119 MPs in the Dewan Rakyat.

"After the 15th General Election, you might have 222," added Najib referring to the 222-seat Parliament.

On Sunday (June 5) evening, Muhyiddin denied that he was attempting to return as the premier, saying that he met with leaders from various political parties except Barisan Nasional, in seeking an electoral pact to take on GE15.

He said he took the initiative to reach out to political leaders in order to exchange opinions regarding the one-on-one formula.

At an event in Libaran, Sandakan on Sunday (May 29), Shafie claimed that Muhyiddin – the Bersatu president and Perikatan Nasional chairman – told him that he had the backing of 119 MPs in the 222-member Dewan Rakyat.

Shafie also claimed that he discussed the matter with PKR president Datuk Seri Anwar Ibrahim, who he said was agreeable to supporting Muhyiddin.

"I told him (Muhyiddin), if you have the numbers, go ahead, I won't follow you," Shafie said in Libaran.

Dr Mahathir also told a press conference on April 1 that Muhyiddin had sought the Langkawi MP's support to be premier again.

Following Pakatan Harapan and Perikatan Nasional's disastrous outings in two state elections - Melaka, Johor - there has been divided opinion among political parties that a united front was needed to take on Barisan.

However, political parties were also split on prospects of forming an electoral pact, due to the slew of defections that took place following the former Pakatan government's collapse in the Sheraton Move in Feb 2020.

Muhyiddin had served as a premier for 17 months in March 2020, but he tendered his resignation in August after a group of Umno MPs led by party president Datuk Seri Dr Ahmad Zahid Hamidi, withdrew support for him.

Ismail Sabri was subsequently appointed as the prime minister. 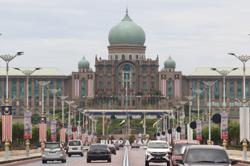