HULU SELANGOR: Things got slightly heated in Kedah, but other than that, the 2022 PKR election physical re-voting process on Saturday (May 28) involving six divisions in four states ran smoothly.

With this development, unofficial results will now be published on the party's official website within 24 hours, party officials said.

In Selangor, the re-voting process for the Hulu Selangor division was completed at 5.15pm without any provocation or disputes.

The party polls in Hulu Selangor had to be re-held after the one initially held on May 21 was disrupted due to a lack of facilities such as tables and chairs.

In Kedah, the voting process for the Padang Serai division went smoothly despite some squabbles outside the polling station at Dewan Sri Karumariamman Paya Besar, in Lunas.

Kedah JPP coordinator Datuk Rashid Din said there were arguments outside the polling centre, but the situation was put under control and the voting process went ahead smoothly.

In Sabah, the re-voting process for the Pensiangan division held at the Kampung Malampoi Longhouse, Nabawan and Gardan Homestay in Keningau also ran smoothly.

Physical voting in all six divisions was held last week but had to be redone due to several problems including technical issues.

The PKR polls will proceed now with online nominations for the 20 members of the Central Leadership Council (MPP), the Angkatan Muda Keadilan (AMK) leadership council and the Women's Leadership Council from Sunday (May 29) until May 31. – Bernama 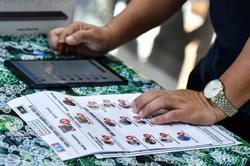