Hot commodity: Customers buying spring chicken, which is being sold at RM12 per chicken, at a wet market in Putrajaya. — Bernama

PETALING JAYA: The government should consider current operating costs and let chickens be sold at market price to avoid more sellers having to close down their business, chicken suppliers have pleaded.

One seller, who spoke to The Star on condition of anonymity, believed that RM12 per kg was an ideal price but said more studies should be done on the matter.

The chicken farmer, who had been in the industry for almost two decades, said chicken prices only increased by less than 35% in 20 years even though operational costs had increased by up to 150%.

“The Domestic Trade and Consumer Affairs Ministry should have discussed with industry players before imposing a ceiling price.

“A ceiling price should be based on our current operating costs, including increased transportation and service costs, which have affected us at every level, from farmers to sellers.

“If the government wants us to sell at a low price, please continue giving us the subsidy so that we are not forced to close our business,” she said.

Another chicken supplier, who also wanted to remain anonymous, said halting chicken export was not a feasible solution.

“In fact, it may cause many farmers to shut down their operations.

“Farmers will be very upset when we stop exports as it also means we will have a surplus in the market, which will cause prices to drop.

“This is not the correct way to solve the pricing problem. (The rise in the price of chicken) is a worldwide problem, but our prices are still among the lowest because of government intervention.

“The government should be more tolerant and let the market decide the price, which is what other countries are doing,” he said.

The supplier, who exports over 20,000 live chickens to Singapore, said the sudden ban on poultry export would also affect the country’s reputation.

The government on Monday announced that the export of chicken – now numbering 3.6 million a month – will be halted from June 1 until the price and supply of chicken stabilise. 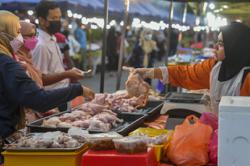