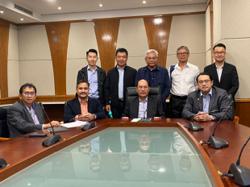 PUTRAJAYA: The Home Ministry will hold discussions with the Philippines, Indonesia and Bangladesh on the proposal to recruit workers from these new source countries for the security sector.

Home Minister Datuk Seri Hamzah Zainuddin (pic) said a decision at the policy level had been agreed upon to bring in foreign labour from other countries, apart from Nepal.

"However, to bring in these workers, they will have to meet the criteria (set), that is, the foreign workers need to have the work experience in the security sector in their own countries," he told reporters after attending a Malaysian Maritime Enforcement Agency (MMEA) Hari Raya celebration, here, on Tuesday (May 23).

He said the applications for foreign workers can be submitted after discussions on the matter had been held but their entry would depend on the decision of the source nations involved.

Hamzah was previously quoted as saying that the government had considered the proposed recruitment of foreign workers in the security sector from new source countries to balance out the shortage of Nepal and local workers in this sector.

Meanwhile, MMEA director-general Datuk Mohd Zubil Mat Som said the agency made 63 arrests through Op Pagar Laut conducted from April 19 to May 17 against several maritime criminal offences including illegal entry into the country, smuggling of contraband and controlled goods, and intrusions by foreign fishing boats.

He said the total value of the seized items was about RM23mil.

Op Pagar Laut, which is in its seventh year, is held each year in conjunction with the Aidilfitri celebration as a special operation that focuses on curbing cross-border criminal activities throughout the festive season. - Bernama