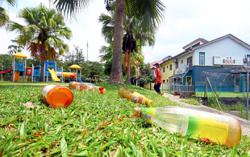 GEORGE TOWN: They were once called “kedai botol” or bottle shops. But most recycling centres here have already stopped collecting glass bottles.

However, K. Paramasiwam, 68, is one of the few who still continues the old way and accepts glass waste from the community, although most drinks are now sold in plastic bottles.

The private operator said recycling glass waste is less profitable now, adding that the demand for such bottles has dropped significantly.

“Many products have changed from using glass to plastic bottles, unlike those days when everything would come in glass bottles.

“However, there are still some business operators who use glass bottles, mainly from small industries that produce soy sauce and ketchup, or honey,” he said at his shop in Lebuh Victoria yesterday.

Paramasiwam pays between 5 sen and 15 sen for every glass bottle, depending on the size.

He spends another 10 sen to 20 sen for manual cleaning before reselling them to those who want the bottles.

Another recycling station owner, S. Kumara Vellu, 46, said reselling a tonne of glass bottles now could only fetch between RM50 and RM80, compared to a tonne of plastic that could be resold for more than RM1,000.

His centre in Sungai Puyu has since stopped accepting glass.

Among the reasons, he said, are hygiene issues, high injury risks and fewer buyers.

“Glass bottles have to be cleaned manually and many of our workers have been injured while working on the bottles.

“Hygiene is another issue as we won’t know if the bottle is contaminated. We stopped accepting glass bottles for several years already,” he said.

“Most products now come in plastic bottles as they make for more cost-efficient and cheaper alternatives. Most operators have stopped accepting glass bottles,” he said.

He advised those who want to dispose of glass bottles to seek help from the Penang Island City Council (MBPP) and Seberang Prai City Council.

The local authorities, he said, should provide options of where glass bottles could be recycled.

Acting MBPP Urban Service department director Mohd Zamzuri Hussain said the public could reach out to the council if they want to dispose or recycle glass items.

He said the Buddhist Tzu Chi Merits Society is the only organisation that helps to collect glass bottles as part of its corporate social responsibility programme.