Systems on show: Hishammuddin and Hamzah (right) visiting the DSA exhibition at MiTEC in Kuala Lumpur. The exhibition and Natsec will be held at MiTEC till Thursday. — FAIHAN GHANI/The Star

He said he would meet with his counterparts from Indonesia Prabowo Subianto and the Philippines Delfin N. Lorenzana on the sidelines of the Defence Services Asia (DSA) exhibition and National Security Conference Asia (Natsec) 2022 which begins today.

“We had created a trilateral (arrangement) before but for one reason or another, this requires rejuvenation.

“So the defence ministers of Indonesia, the Philippines and myself have agreed this is a good opportunity to revive our trilateral cooperation.

“Once we put in place the defence arrangements between the three ministers, I think we can expand that to the internal securities of the three countries,” he told reporters at the Malaysia International Trade and Exhibition Centre (MiTEC) yesterday.

The TCA between the three countries was created to boost security in the Sulu Sea, Sulawesi’s coast and Sabah’s east coast.

Meanwhile, Hamzah said a comprehensive masterplan to address border control is in the works.

He said security at the country’s borders cannot be left to one ministry alone, adding that both the Home and Defence ministries needed to work together on this.

“For the last two years, Ops Benteng has shown how both ministries can succeed together. To protect our porous borders, we need everyone to be together.

“Because of this, we will come out with a comprehensive masterplan on securing our borders in terms of defence and internal security, and we will submit it to the Cabinet,” Hamzah said.

He added that the proposed plan would be extensive and would not only focus on border security in Sabah.

On the four-day exhibition, Hishammuddin said the event is expected to receive 25,000 visitors from more than 50 countries.

He added that Malaysia will play host to over 350 foreign VVIP delegates from 45 countries comprising ministers, defence and security chiefs among others.

Covid-19 standard operating procedure will be maintained throughout the event, he added.

“Events of this scale returning shows a clear sign that the country is ready to transition to the endemic phase.

“This shows that Malaysia is open for business,” he said.

The DSA and Natsec will be held at MiTEC until Thursday. 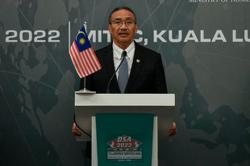 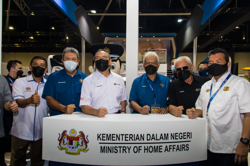