SERDANG: Cracks were seen on the ground before the Seri Kembangan landslide happened, says a witness to the incident.

“We only had time to move 10 of our cars. But we lost three. There weren't any loud noises. We started seeing cracks on the ground at around 5.30pm and we did what we could,” said 39-year-old car workshop employee Alter Jastan.

Alter added that he was in a daze when the road finally caved in, saying that it was a very scary moment for him.

“It happened right in front of us. Thankfully nobody was injured,” he said.

When asked if landslides were common occurrences, Alter said that a previous one occurred years ago and the surrounding shopkeepers filed complaints.

“Some slight maintenance was conducted last year. But this landslide is the worst one yet,” he said.

On Tuesday (Jan 25), five vehicles parked on Jalan LP1A/2 Lestari Perdana, Serdang, Selangor were damaged after a landslide in the area in the evening.

Following this, workers at 17 commercial premises were evacuated after the Subang Jaya City Council conducted an assessment of the area. 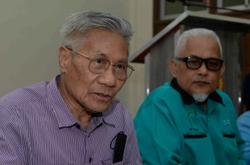