The Shah Alam Fire and Rescue station, when contacted, said that the flash floods that occurred along the stretch of road in Taman Sri Muda was currently under control.

“We have patrolled the area earlier and saw that the situation was still under control.

“As a precaution, however, we have dispatched personnel to the area along with two boats," said an officer from the station.

This comes following a tweet by user Raymondasz (@jokerasya) showing a video detailing the rising waters along the stretch of road.

The video was shared in response to a tweet by Selangor Menteri Besar Datuk Seri Amirudin Shari saying that a special committee was being formed to overcome the effects of climate change in Selangor.

"Sir, the Taman Sri Muda area especially at Jalan Tokoh 25/8 has started flooding again. What are the actions of the state authorities?

Previously, more than 2,000 homes in Taman Sri Muda were submerged by the floods for a period of five days following heavy rains on Dec 18 last year.

This saw more than 6,000 residents being evacuated to temporary relief centres (PPS). 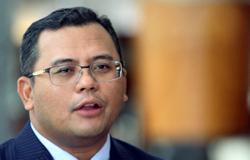