IPOH: The lorry driver who was killed in the landslide at KM27.10 Jalan Simpang Pulai-Blue Valley here, had always shared stories of landslides in Cameron Highlands to raise the awareness of others but little did he know that he would be a victim himself.

The victim, Muhammad Hafiz Hamdi, 31, a father of two, aged two and an infant, had been transporting vegetables from the highlands daily.

The elder brother of the victim, Mohd Kamal Hamdi, 40, said he was surprised when his younger brother was quiet when he shared the landslide story on their family WhatsApp site.

"I felt strange as he did not respond and so I contacted his friends to check on his whereabouts.

"When his colleague told me that my brother was involved in the incident, I returned to Ipoh straight away by driving from Kuala Lumpur and dashed to the landslide location as I could not believe it could happen to him,” he said when met by reporters at the incident location on Thursday (Dec 2).

Mohd Kamal said the identification of the body was carried out by his wife who was traumatised by the event.

According to him, the body would be laid to rest in their village in Tanjung Piandang, Parit Buntar after all processes at Raja Permaisuri Bainun Hospital (HRPB), Ipoh have been completed.

Meanwhile, at HRPB Forensic Department, the victim's brother-in-law when met said the victim was a cheerful and good man.

Rosli Saidin, 52, from Butterworth, Penang said he knew of the incident at about 7pm from the victim’s wife who is his younger sister.

"My children saw the picture of the incident which went viral but could not confirm if it was my brother-in-law.

"Our entire family has accepted the shocking turn of events,” he said.

Rosli, who is also a vegetable lorry driver, said his brother-in-law had been carrying vegetables from Cameron Highlands for sale in Parit Buntar everyday.

He said the victim and his sister were married four years ago and added the victim’s wife rushed from Tanjung Piandang to the incident location on receiving the bad news.

So far, two victims buried in the landslide were found dead, namely Muhammad Hafz and the driver of a luxury multi-purpose vehicle identified as Tan Chee Heng, 36, who was on his way from Gua Musang to Penang.

It was learned that Tan, who was from Klang, Selangor wanted to visit his grandmother and was bringing strawberries in the vehicle he was driving. - Bernama 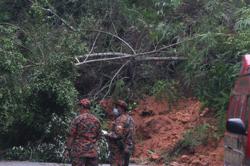 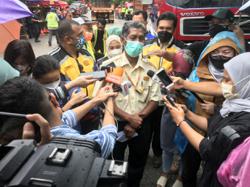