IPOH: The case in which a businessman has been charged with the murder of a security guard has been set for mention in January next year.

Magistrate Noor Azreen Liana Mohd Darus set Jan 12 as the date for the hearing, pending a medical report on the victim.

Deputy public prosecutor Sufi Aiman told the court that they are still waiting for the coroner’s report.

Lawyer M. Kulasegaran, who is holding a watching brief for the family, asked the court to speed up the process as it is a high-profile case.

In December last year, the 33-year-old accused assaulted the security guard at a condominium.

Ahmad Noor was charged on Jan 6 this year under Section 335 of the Penal Code for causing grievous hurt.

On Sept 9, the charge was reframed to murder after the security guard died on Aug 27 at his house.

Thava’s death caused a public outcry for the suspect to be charged with murder.

When met outside the court, Kulasegaran – who had arrived with Thava’s wife E. Philomena – said the case had garnered public attention, therefore it needs to be dispensed quickly.

“If we can get all the documents, including the post-mortem and coroner’s report, the case can be brought quickly to the High Court.

“However, since it is not ready yet, it is wasting everyone’s time. We hope the government takes this into attention and releases the information as quickly as possible. This is the third time we are here,” he said.

Philomena, in tears, demanded the case be resolved quickly.

“I want the case to be settled as soon as possible,” she said. 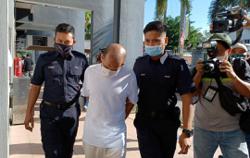