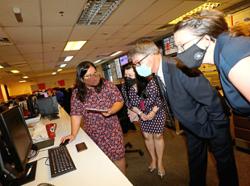 The Nutella chocolate cake was presented by Comptroller of the Royal Household of Istana Negara Datuk Ahmad Fadil Shamsuddin, who said the gift was in recognition of the media company’s good relations with His Majesty during the years when he was president of the Football Association of Malaysia and the Malaysian Hockey Federation.

“His Majesty congratulates The Star’s staff and founders, past and present, whose efforts have enabled the reaching of this 50th anniversary milestone. The palace looks forward to many good years of partnership with all members of the media,” said Ahmad Fadil.

The cake was later shared among staff of various departments.