PETALING JAYA: The first broadcaster to offer to air a debate on the nation's cabotage policy between Datuk Seri Dr Wee Ka Siong and Lim Guan Eng was TV3, says the Transport Minister.

"TV3 was the first to offer to host and they have already called both sides. Inform TV3 of the debate format you want. I won't run away," he said in a Facebook post on Sunday (Oct 24).

Dr Wee said he received the invitation and personally penned a reply to TV3 for the debate to take place on Nov 2.

"I have only received one invitation from a TV station and I have already replied to TV3's invitation to me and yourself. I'm totally fine with this and took only a minute to draft a positive reply to TV3 myself. Have you replied, Guan Eng?" he asked.

Dr Wee also said TV3 producer Josephine Dass called his press secretary on Sept 30 to offer to host the debate and also made the same call to Guan Eng.

"Lim Guan Eng himself agreed to the debate with the exact words 'bila-bila (any time)'. So, there should be no issues for him when TV3 gave Nov 2 to have the debate.

"All Guan Eng needs to do is honourably hold to his agreement with TV3 as the first and best TV station and agree to take part in the debate," he said, adding that there was no need to complicate matters by dragging in another broadcaster.

"My advice to Guan Eng is to stay calm and let's debate civilly and focus on the topic, which is the cabotage policy. I will bring facts, not fiction," said Dr Wee.

The MCA president also said that the government's decision on the cabotage policy had been finalised and he had been tasked as the spokesperson on the issue.

He also said he was now under quarantine at home after returning from London a few days ago. 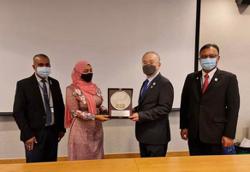