The Johor police chief said that these lorries were inspected over the course of 150 operations conducted across the state, adding that 341 summonses were issued during the same period.

“We have received complaints from certain quarters that Johor police are too strict on this but I will like to remind everyone that they should follow the rules as we do not practise double standards,” he said.

He added that four i-Cop systems will be set up; one placed along the North-South Expressway and three in several districts.

“Through the system, police will be able to detect whether the vehicle has unpaid summonses or even fitted with a fake registration plate number and reported stolen,” he said.

Meanwhile, he said that in the latest operation, a 40-year-old local man was found to be driving a one-tonne lorry while high on drugs.

Comm Ayob added that the man was flagged down at the Skudai toll plaza here, and said that the man even showed police personnel members present a packet of a white substance believed to be heroin hidden inside his pouch bag.

“The suspect is among 10 individuals who were subjected to drug tests, but he is the only one who failed as he tested positive for methamphetamine,” said Comm Ayob.

“He was heading towards Pasir Gudang from Pagoh before being stopped at the Skudai toll,” he added.

Comm Ayob said that the man would be detained for investigations into offences under Section 12(2) of the Dangerous Drugs Act 1952.

On the joint operation held together with the Department of Environment (DOE) and PLUS, Comm Ayob said the operation was held to find errant commercial vehicle drivers.

“The police have received many complaints about them, including driving dangerously, overloading, faulty breaks, not putting their indicators on, using the emergency lanes and many more,” he said.

“Within an hour of this operation, we have inspected 152 heavy vehicles and issued 93 summonses for various offences so far,” added Comm Ayob. 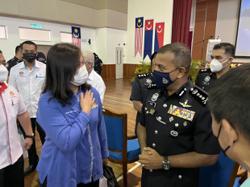