A team of policemen from the General Operations Force (GOF) working in collaboration with the state Forestry Department and WWF Malaysia found the tangar bark worth RM350,000 in a boat.

Sabah GOF commander Sr Asst Comm Abdul Rani Alias said Saturday (Sept 25) that the bark was believed to have been stolen from the swampy areas of the Sungai Paitan Forest Reserve, Jamboangan Island and Sungai Sugut all in the east coast Beluran district.

He said the abandoned boat could have been brought in by suspects from the Philippines.

The operation, codenamed Ops Khazanah Bersepadu, was carried out at around 2pm on Friday (Sept 24).

The patrol team found an unregistered boat worth about RM85,000 during their operations but no one was on board.

"Our team carried further inspection in the surrounding area and did not find anyone in the location," he said.

He said that tree bark was handed over to the Forestry Department for further action.

Investigations were conducted in accordance with Section 23 of the Forestry Enactment 1968 and Forest Regulations 1969.

Forestry Department officials immediately disposed of it by burning all the bark, including the boat, he added. 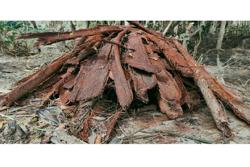