Leisure time: A house boat waiting for fully vaccinated tourists at the Gawi jetty in Tasik Kenyir, Kuala Berang. The scenic lake has received 35,000 domestic travellers since its reopening on Sept 1. Terengganu has transitioned to Phase Three of the National Recovery Plan. — Bernama

PETALING JAYA: Industry players hope that more travel destinations can be considered as domestic “tourism bubbles” in addition to the government’s plans to reopen Genting Highlands, Pulau Tioman and Melaka.

Malaysian Association of Tour and Travel Agents (MATTA) president Datuk Tan Kok Liang said they welcomed more travel bubbles but hoped that the pace could be accelerated to include other destinations nationwide such as those in Penang, Kuching and Kota Kinabalu, with tentative dates to facilitate promotions and effectiveness.

“Overall, the industry is on the verge of collapse and domestic travel must be intensified the soonest possible with the opening of international borders.

Holiday makers, he said, should be given more choices in destinations rather than “mono travel bubbles”.

Tan said he hoped that vaccinated tourists, too, could move around freely rather than be confined by interstate restrictions.

As complying with the SOP was of the utmost importance, he said he was confident that travellers would not try to break the rules for the sake of their own health, adding that it was a “shared responsibility”.

The proposal, she said, would be brought to the Special Committee on Pandemic Management, chaired by Prime Minister Datuk Seri Ismail Sabri Yaakob.

Malaysian Association of Hotels (MAH) president Datuk N. Subramaniam said plans to reopen selected destinations were a good step forward not only to restart and revive the tourism sector, starting with domestic travel, but also to give hope to stakeholders and to transition to living with Covid-19.

“With Langkawi as a reference point and the SOP pretty much firmed up, the upcoming reopening SOP can be simplified for easy understanding and compliance – not only for operators but also tourists,” he added.

He also said that this was further complemented by industry efforts such as MAH’s Clean and Safe Malaysia hygiene and safety certification for hotels, providing peace of mind to leisure and business travellers.

“The industry also hopes that more destinations can be considered on top of these such as Penang, Johor and Sabah, alongside the reopening of interstate travel for those fully vaccinated,” he said.

As the Langkawi tourism bubble had been proven to be a success, Malaysian Inbound Tourism Association president Uzaidi Udanis said this showed that the industry could reopen with everyone learning to live with the virus.

“We cannot continue to isolate ourselves as this will impact our economy.

“The tourism industry is one of the most important industries in the country,” he added.

With the possibility of these three destinations reopening, Uzaidi said he believes that Pulau Tioman would have a similar SOP like Langkawi while Genting Highlands, which has its own security and specific access roads, would be easier to manage.

For Melaka, Uzaidi said the SOP could be looked into to see how to further improve it.

“Once we have done that for Melaka, we can open up more destinations in other places,” he said. 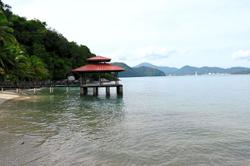