Cops seize RM20mil worth of untaxed smokes and beer

SEMENYIH: Police have seized three containers laden with untaxed cigarettes and beer worth about RM20mil in separate raids in Shah Alam and Klang.

Bukit Aman Internal Security and Public Order director Datuk Zainal Abidin Kassim said the seizure on Tuesday (Aug 25) was the biggest this year for the Central Brigade of the General Operations Force (GOF).

He said the raids were conducted following two months of intelligence gathering.

“In the first raid at 4.13pm Tuesday, two container lorries were stopped on a road in Section 33, Shah Alam.

"Upon inspection, 87,150 cartons of cigarettes with the duty unpaid were found. Both lorry drivers, aged 29 and 35, were arrested.

“The unpaid tax on the seized cigarettes is estimated at RM12mil,” he told a press conference here on Wednesday (Aug 25).

Zainal Abidin said further investigation led police to a warehouse in Kapar, Klang, at 5.18pm the same day where another container lorry laden with 1,295 cartons of beer worth RM1.4mil, with unpaid tax amounting to RM1.4mil, were found and seized.

“The lorry driver, aged 34, was also arrested," he said, adding that two lorries, three containers and three mobile phones were also seized in the two raids.

He said initial investigations revealed that the three drivers received RM100 to RM200 each to deliver the items within the Klang Valley and up to RM300 to other destinations.

“They claimed that they did not know who hired them to make the deliveries,” he said, adding that further investigations were ongoing to track down the mastermind of the syndicate. – Bernama 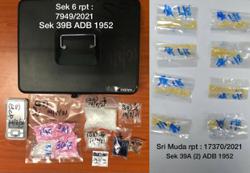