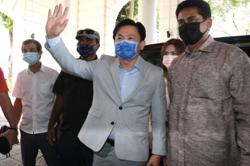 IPOH: A woman was seen leaving the Meru Desa Park residential area guardhouse on foot a day after an alleged rape incident involving an assemblyman, the High Court here heard.

CCTV footage was shown to witness A. Murugiah, who testified in the trial of Parti Pribumi Bersatu Malaysia’s Tronoh assemblyman Paul Yong on Wednesday (Aug 18).

The footage showed a woman holding something in her right hand and chatting with a guard before walking away from the guardhouse at about 1pm on July 8, 2019.

Murugiah, the housing area’s residential maintenance supervisor, agreed with lead counsel Datuk Rajpal Singh that the guards on duty did not record any details in the logbook as the woman was leaving, and raised the barrier for her to leave almost immediately.

When asked where the woman appeared to be going, Murugiah said she had taken the road leading out of the residential area.

Rajpal also asked Murugiah why he stopped working at the residential area at the end of the same month (July 2019).

“I left the job of my own will, as I was not satisfied with the management committee, and my job was too stressful,” he replied.

When questioned by lawyer Salim Bashir on the total number of CCTVs installed at the residential area, Murugiah answered there were 24 but not all of them were functioning.

“Are there any CCTVs pointing to the road leading towards YB Paul's house,” he asked, to which the witness replied there were none.

Salim then asked if it would be difficult to know for sure who was entering Yong's house with no CCTVs covering the premises or the road leading to it, and Murugiah agreed.

Another witness, a friend of Yong who had driven the assemblyman and his wife back from Kuala Lumpur to Meru Desa Park on July 7, 2019, said he never saw Yong's maid throughout the time he was outside the house.

Lee Yeong Wai said they reached Meru Desa Park at about 8.30pm, and he chatted with Yong outside his house, before going back to his own home.

Lee agreed with Rajpal that for the entire duration he was with Yong outside the house, the accused was still dressed in the same attire he wore on their journey back from Kuala Lumpur, a black T-shirt and long pants.

Yong is accused of raping his maid, who was 23 at the time. On Aug 23, 2019, he claimed trial at the Ipoh Sessions Court to the charge. 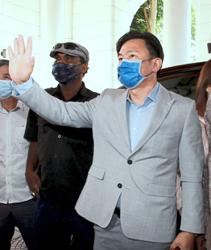