PETALING JAYA: Former national shuttler Datuk Lee Chong Wei is dismayed by the online abuse his former teammates received after being eliminated at the Olympics, saying that no one goes to court and wants to lose.

"As a former teammate, I felt so much for them.

"I know these players. They went to court with only one aim, one goal. To win the game for the flag on the chest, to make us proud. Tiada athlete yang mau kalah (No athlete wants to lose)," he said in a Facebook post on Sunday (July 25).

He said in every game, there is always a winner and a loser.

"Sometimes it is just not your day. Yang layan depan TV pun dah heart attack and kecewa, apalah lagi pemain dalam gelanggang? (Those watching the game on TV can have a heart attack and are disappointed, what more the players on the court?)

"These players brought you joy before. Don't mock and desert them when they lose a game" he said.

He also had a special message for mixed doubles pair Chan Peng Soon and Goh Liu Ying, who were eliminated after two losses in group games.

On Sunday, the 2016 Rio Olympics silver medallists went down 12-21, 15-21 to Germany's Mark Lamsfuss-Isabel Herttrich in Group D at the Musashino Forest Sports Plaza in Tokyo. 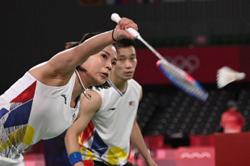