In a match that should favour the Malaysians, the 2016 Rio Olympics silver medallists Peng Soon-Liu Ying went down 12-21, 15-21 to Germany's Mark Lamsfuss-Isabel Herttrich in Group D at the Musashino Forest Sports Plaza in Tokyo.

The world No. 15 German pair have never beaten the Malaysians but today, they powered their way through good tactical plan and persistent attacking to crush Peng Soon-Liu Ying.

World No. 7 Peng Soon-Liu Ying, demoralised by their defeat to Hong Kong's Tang Chun Man-Tse Ying Suet 18-21, 21-10, 16-21 in the opener less than 24 hours ago, were unable to turn things around although they tried to make a comeback in the second game.

They face world No. 2 Wang Yilyu-Huang Dongping of China in the final group match next but their hopes to enter the last eight elimination round has virtually ended 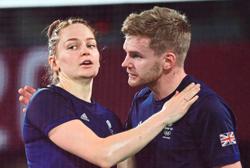