KUALA LUMPUR: Preacher Ustaz Ebit Lew has lodged a police report over various allegations made against him related to his aid mission to Gaza in Palestine.

Muhammad Nadir had questioned Ebit method of obtaining entry into Gaza and the source of the funding for the mission while Caprice had questioned Ebit's methods when handing out aid. The rapper has since apologised to the preacher.

At a press conference outside the Dang Wangi police station on Wednesday (July 21), Ebit said the allegations were untrue.

He said he had proof that the allegations were false.

"By right, those who have accused me should provide the proof but I will do so here," he said.

However, Ebits lawyer, Datuk Hasnal Rezua Merican said he had told his client to only answer questions after his statement had been recorded by the police.

The lawyer also said they would consider initiating civil proceedings over the allegations after the police investigation is complete. 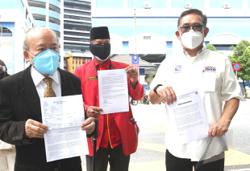