KAJANG: The body of a man was found hanging from a pedestrian bridge along the SILK Highway on Monday (June 28) morning.

The deceased, who was believed to have contracted Covid-19, had complained to his family prior to the incident that he could not bear the pain of the symptoms.

Kajang OCPD Asst Comm Mohd Zaid Hassan said the police received a call at 7.47am from a member of the public who saw the body hanging from the pedestrian bridge near Taman Impian Ehsan, Balakong.

"Investigations revealed the man was identified as a 56-year-old local.

"Further checks with the victim's family revealed the victim was suspected to be Covid-19 positive.

"He claimed he could not take the pain he experienced such as cough, fever and breathing difficulties," he said.

"Our personnel were called to help bring the body down.

"We immediately handed the body over to the police for further action," he said.

ACP Mohd Zaid said the body has been sent to the Kajang Hospital for post-mortem.

Those in need of someone to talk to can call Befrienders at 03-7627 2929 or visit its website at www.befrienders.org.my. 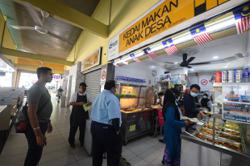