IN RESPONSE to Deputy Agriculture and Food Industries Minister II Datuk Che Abdullah Mat Nawi’s statement on June 16, 2021 regarding the Penang South Islands (PSI) and fisheries matters in relation to the project’s implementation, the Penang Infrastructure Corporation (PIC) would like to categorically address and clarify a number of his remarks.

PIC which is the special purpose vehicle set up by the Penang government for the implementation of the Penang Transport Master Plan and PSI said the clarifications are based on data from the Department of Fisheries (DOF) as well as data collected for the project’s Environmental Impact Assessment (EIA) report and the Fisheries Impact Assessment (FIA) report.

The list of 955 fishermen provided by DOF is the total number of fishermen from Tier 1 and 2 areas, much lower than 4,211.

PSI will not threaten 87 fish species

According to the EIA and FIA, all species found around the PSI site including the species mentioned are commonly found in Malaysian coastal waters. The PSI area is not a breeding ground for bawal putih (white pomfret), bawal tambak (Chinese pomfret) or prawns.

The pomfret is a pelagic fish that normally lives and spawns in deeper waters. For prawns, their nursery grounds are in the estuary and mangrove swamps. 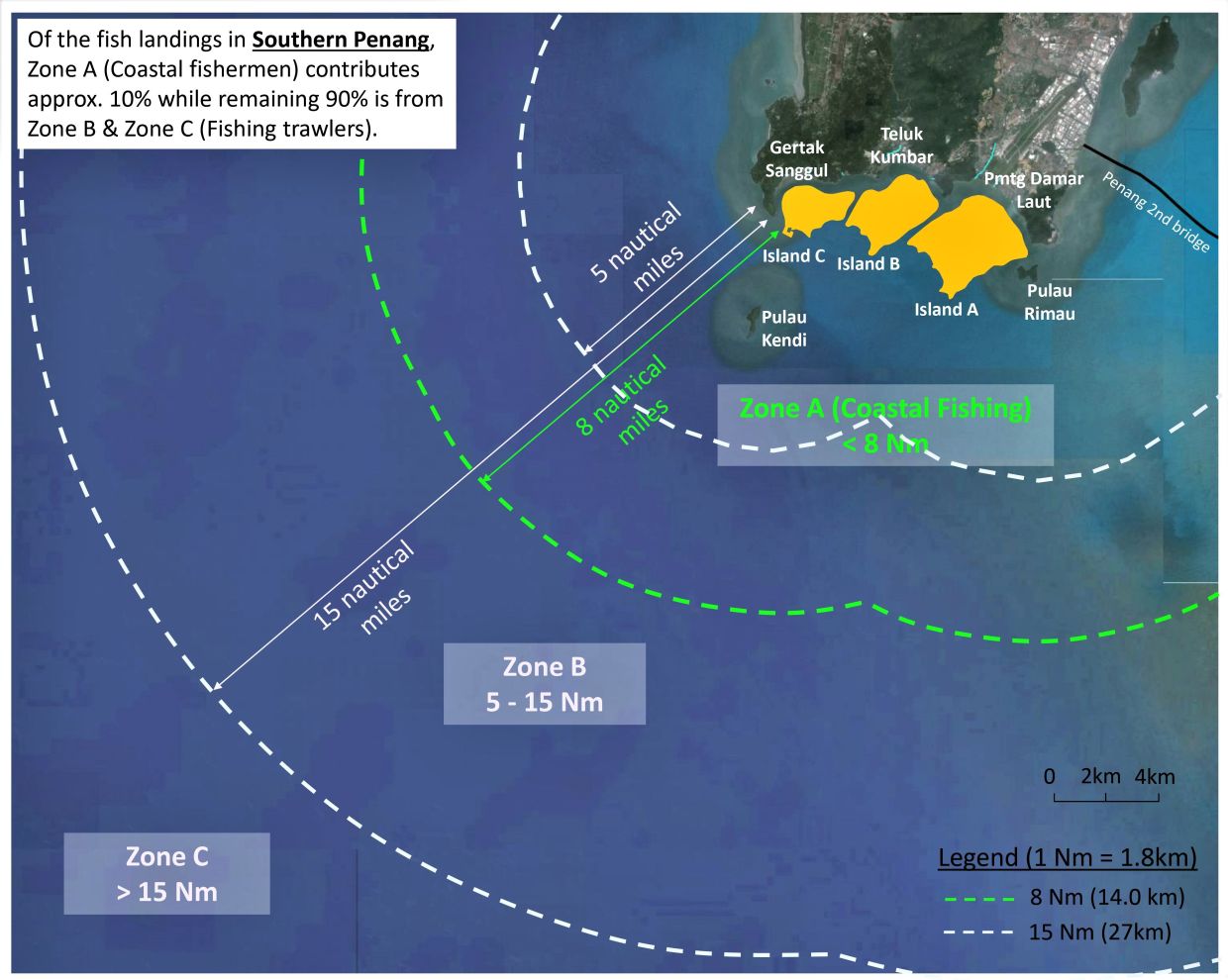 Based on DOF information, the Batu Maung unit’s Zone B and C trawler boats contributed more than 90% of the 13,418.11 tonnes. The fishing ground for coastal fishermen is only in Zone A which is eight nautical miles (14.8km) from the coastline.

Zone B and C fishermen have larger boats that operate far from the coast in deeper parts of the sea. Zone B fishermen go as far out as 15 nautical miles (NM) while Zone C fishermen go beyond even that, so their daily haul is higher than the average coastal fishermen who operate in Zone A about 8NM from shore.

Fishermen can continue to fish

Fishermen can still go to sea and fish during and after the reclamation via a 250m-wide navigation channel that allows 24-hour access to the sea.

Improving the livelihood of fishermen is also a top priority in PSI. The Social Impact Management Plan (SIMP) provides financial aid in the form of ex gratia to the fishermen, new boat and engine, new floating jetties, a multipurpose commercial fishery building, new jobs and business opportunities, re-skilling, and free tuition and scholarship for fishermen’s children.

The State Government’s allocation for the SIMP is estimated at RM100mil, the only project in Malaysia to date with such a huge sum set aside for the local fishermen community’s improvement.

The PSI also has a range of fisheries enhancement initiatives that include the deployment of artificial reefs, fishery aggregating devices, release of fish and prawn fries, mangrove planting, and marine research funds. This will rejuvenate the marine ecosystem and enhance fisheries in the surrounding area for fishermen.

The Penang state government insists on helping fishermen who want to continue fishing with these various assistances provided in the SIMP and fisheries enhancement programmes.

The study on noise pollution impact caused by the project can only be undertaken when reclamation works are ongoing. The consultant has taken the baseline noise and will compare it with noise generated during the reclamation and dredging works.

The State Government is in the process of appointing a suitable consultant to carry out the prawn migration study. The study involves long observation time, and can be carried out concurrently with the project implementation. 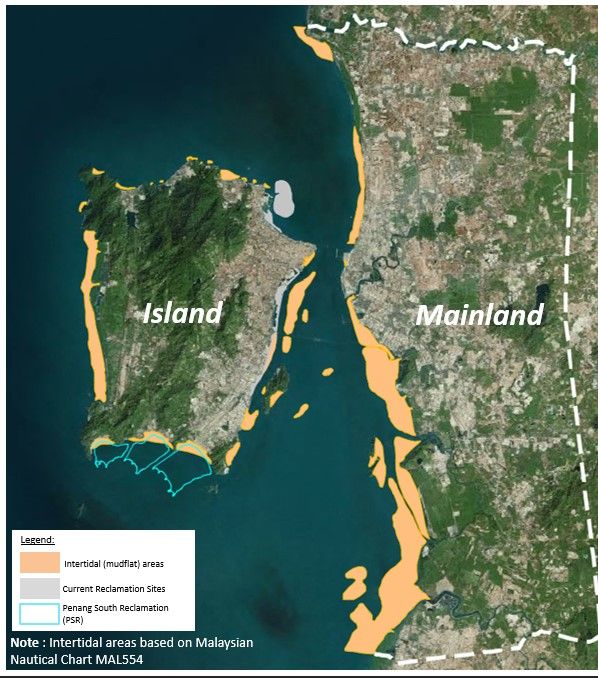 The affected intertidal zone (mudflat) is only 4% of the entire intertidal zone of Penang. There are still plenty of intertidal areas along the west and east coasts of Penang island, and the coastal areas of Seberang Perai.

It should also be noted that mudflats near the Penang South Reclamation (PSR) zone are not breeding grounds for both prawn and pomfret, as explained earlier.

Many areas for coastal fishing

Based on the EIA report, the coral cover in Pulau Rimau is less than 5% and categorised as “poor”,

having less conservation value if compared to the coral cover in Pulau Kendi (<30%), which is in “fair health”.

The beaches near PSI at Gertak Sanggul, Pantai Belanda, Pantai Medan, Teluk Kumbar and Telok Tempoyak recorded only nine turtle landing in 14 years, compared to 464 and 208 landings at Pantai Keracut and Telok Kampi respectively in the northern coast.

Dolphins will not lose their food source

Dolphins are known to feed on fish, which are mostly found in deeper waters and not shallow waters like the PSI area.

For the benefit of all

The Penang Infrastructure Corporation reiterates that PSI is a long-term project that will benefit Penang as a whole with its inclusive approach adopted right from the planning stage.

“It is a project with something for everyone and in this case, we have put fishermen first. They top the list of project beneficiaries before others as the PSI’s SIMP has been designed especially for them,” PIC said in a statement.

“Penang is an industrial state with an economy built on the manufacturing and services sectors.

“The majority of Penangites are working in either the manufacturing or service sectors.

“Therefore, we need to continue to ensure Penang maintains its competitive edge and attractiveness to investors so that the state’s economy can grow and safeguard our future for decades to come.

“We hope the deputy minister and the public will not be misled by inaccurate information on the project. PSI is crucial for our economy and future.”