IPOH: A 24-year-old woman was killed and her parents were injured when the car they were in fell down near an overhead bridge at KM313 of the North-South Expressway near Tapah.

Kunalan was driving the car at the time of the accident and the family had been heading from Johor to Alor Star for the funeral of Kunalan's father.

"Both her parents are being treated at the Tapah Hospital. They have been notified of their daughter's death," he said.

Supt Wan Azharuddin said Kunalan is believed to have lost control of his vehicle before it crashed through a railing on the right and fell down near the bridge.

He said the car was a total loss and has been sent to a Puspakom centre to be checked.

"The case is being investigated under Section 41(1) of the Road Transport Act for reckless driving causing death," he said, adding that no arrests have been made. 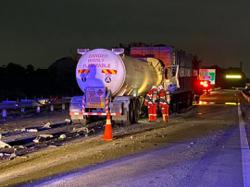