GEORGE TOWN: Penang has asked the Health Ministry to reconsider its request and give approval to receive two million doses of vaccines from a private company.

Chief Minister Chow Kon Yeow (pic) said the ministry in a letter dated March 12 had declined to give approval for the private company to sponsor the vaccines.

Chow said it is baffling when approval can be given to other states to purchase the vaccines and not to Penang.

"We have written a letter on Feb 24 seeking approval for the vaccines, from China, sponsored by a private company as part of its corporate social responsibility.

"However, the ministry rejected the offer saying the National Immunisation Programme was on schedule and Penang was part of it, as such there was no need for the vaccines," said Chow at a press conference at Komtar on Tuesday (May 18).

"If it is allowed, we will be able to vaccinate 80% of people in Penang and the vaccines for Penang under the programme could be distributed to other states.

Chow said with the increasing number of new cases there was a need for an urgent solution to the issue and the Health Ministry should reconsider its stand.

"We want to know why Penang's request was denied while other states were allowed to purchase their own vaccines. 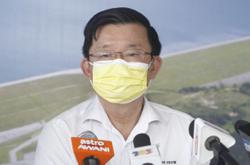