KUALA LUMPUR: Tan Sri Abdul Hamid Bador has asked politicians to truly understand his comments about political interference in the police force instead of blindly criticising him.

The former inspector-general of police said he was speaking about alleged corruption and bribery during Friday's (April 30) press conference.

"I also stated that I have reported the matter to the Prime Minister and the Chief Secretary to the Government.

"Political 'ulama' (religious teachers) do not understand the explanation?" he said on Monday (May 3).

He was commenting on criticism from PAS central dewan ulama information chief Mohd Nor Hamzah, who claimed that Hamid's comments were uncalled for as it invited criticism of the Perikatan Nasional government.

Abdul Hamid handed over the reins to the IGP post to Datuk Seri Acryl Sani Abdullah Sani earlier on Monday. 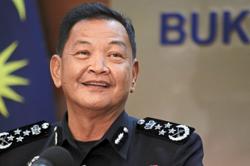