PETALING JAYA: The Malaysian Anti-Corruption Commission (MACC) should immediately act on claims that there is political interference in police matters as not doing so could erode public confidence in the anti-graft body.

The PKR secretary-general also said former inspector-general of police Tan Sri Abdul Hamid Bador's claims of rampant corruption involving "political frogs" in the country was not new and should be investigated.

He said Abdul Hamid's revelation only reinforces his and party president Datuk Seri Anwar Ibrahim's recent claims that the "carrot-and-stick" approach was used to entice Opposition MPs to switch allegiance.

"The carrot is where you offer positions and allocations. The stick is when they send the authorities after you.

"PKR's stance was made very clear when Anwar met the MACC director-general previously.

"The latest revelation by Abdul Hamid isn't something new, it only reinforces our previous statements," he said at a press conference at PKR's headquarters in Merchant Square on Monday (May 3).

At the same time, Saifuddin also said politicians, irrespective of their political allegiance, should be investigated by the MACC if there are elements of graft.

"We admit that in the past during the previous 22 months, there were Umno MPs who joined Pakatan.

"Our statement is for all, because politics should not be tainted by such practices," he added.

In March, Anwar had said that several PKR MPs, namely Sekijang, Padang Serai, Sungai Siput, Putatan and Miri, were either threatened or enticed to switch allegiance to the Perikatan Nasional administration. 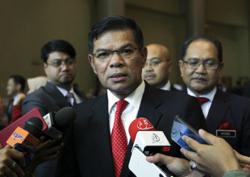