PUTRAJAYA: Datuk Seri Acryl Sani Abdullah Sani will be the country’s new top cop next Tuesday, with the handover ceremony with his predecessor Tan Sri Abdul Hamid Bador to take place a day before.

“We feel there is a need to find a new IGP who can ensure all the good work done by Hamid and previous IGPs will continue to be carried out by the police force.

“With the appointment of the new IGP, I trust that he will ensure the people will be safe and the country will be peaceful, ” he said after handing Acryl Sani his appointment letter here yesterday.

He holds a masters in management from Universiti Utara Malaysia as well as a bachelor’s degree in civil engineering.

Acryl Sani has held various positions in the force at the district, state and federal headquarters levels, including the Police College commandant and the police chief for Terengganu, Perak and Sarawak. It’s official: Hamzah (left) handing over the letter of appointment to Acryl Sani at a special press conference at the Home Ministry. — Bernama

Other postings included being the deputy director of the Criminal Investigation Department, criminal prevention and community safety, commercial crime, strategic resources and technology, as well as internal security and public order.

Hamzah said the appointment was recommended by the Police Force Commission (SPP), adding that all of its members, including Hamid, agreed to Acryl Sani’s appointment.

“As chairman of SPP, I sent a letter to the Prime Minister, who agreed with the new appointment. A letter was then sent to the Yang di-Pertuan Agong seeking the King’s consent, ” he said.

On the post of the deputy IGP, which will be vacant once Acryl Sani assumes his new post, Hamzah said the selection by SPP would take place later.

Hamzah also admitted that the person in a viral audio recording heard talking about reshuffling in the police force was him, and that the conversation which he had with “someone very important” took place some time last year.

However, he denied any impropriety over the matter.

“The police need not investigate because I admit it is me. If you listen (to the conversation), there is nothing wrong (with what I said). The question here is who recorded the conversation and the reason behind it, ” he said.

Although he did not fully explain what the conversation was about, Hamzah said he had spoken to the IGP to submit “a few names to the istana”, but did not make any reference to any (particular) palace.

Several blogs had posted the recording of a man discussing giving a Perakian a promotion, possibly for a role in the police force. 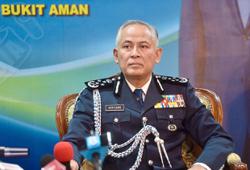