'Grab Aunty' let go due to age, appeals for the chance to continue earning a living

PETALING JAYA: After becoming an Internet sensation at the age of 72 as a Grab driver, Rasamany Vettivelu is now jobless and has to fend for herself.

The 75-year-old was laid off by the e-hailing platform due its restrictions not to hire drivers (above 69 years old) due to safety regulations.

"I was sad and heartbroken when I received an auto-generated notification via text message from Grab saying that due to age restrictions, my services will be terminated on April 30, ” she said.

Rasamany said she was disappointed that she could not continue as an e-hailing driver although she was physically fit.

"I want to be healthy and independent, '' she said.

Rasamany said as a former Inland Revenue Board (LHDN) officer she often dealt with those who had payment issues and would use her discretion for each individual case.

"I only ask that Grab and the Transport Ministry (MOT) use their discretion in my case, '' she added.

The former assessment officer who worked for the LHDN for 39 years became a Grab driver four years ago after she became a victim of a gold investment scam in 2014.

She lost some RM500,000 of her EPF and life savings and was forced to become a Grab driver.

The gutsy pensioner's fighting spirit and positive outlook in life captured the hearts of netizens from all over the world.

She was interviewed on various platforms including TV and radio shows and earned the nickname "Grab Aunty".

Rasamany has since contacted MOT's customer care services as well as the Land Public Transport Agency (Apad) for clarification and was informed that both agencies were open to any policies that would help seniors like her to operate.

An Apad spokesperson told The Star that while they were not in charge of policy matters, as a regulator, the agency is open to policies put forward by the Road Transport Department in terms of licensing and public service vehicle (PSV) usage.

"As long as the vehicle is not older than 10 years and has undergone Puspakom inspections and the driver has a PSV licence, we have no issues with her driving, '' he said.

The Star also contacted a Grab spokesperson on the matter and was told that they were not aware of the matter, adding that they found it strange as they were always pushing for senior taxi drivers to drive. 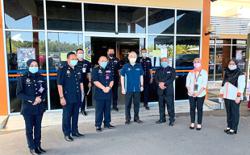