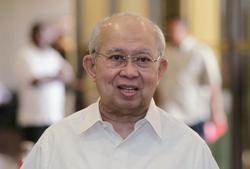 PETALING JAYA: Energy and Natural Resources Minister Datuk Dr Shamsul Anuar Nasarah is ready to quit his post if that is the decision made by his party Umno.

“That is a must as a leader, because we cannot place our own personal agenda above that of the party’s, ” said the party's supreme council member at the World Trade Centre in Kuala Lumpur on Sunday (March 28).

He added however that Umno has not reached any decision on whether its ministers and deputy ministers should resign.

This comes as there were strong calls for the party to cut off ties with Parti Bersatu Pribumi Malaysia (Bersatu) during Umno’s General Assembly 2020 held this weekend.

Up to Umno delegates to evaluate decision to 'go solo', says Annuar