SPECULATION has once again resurfaced that Noor Neelofa Mohd Noor (pic) and PU Riz will be getting married sometime this week, Harian Metro reported.

The rumour was sparked after a video of PU Riz, whose name full name is Muhammad Haris Mohd Ismail, 26, who was seen looking at a sampin at a shop, was uploaded on the Instagram page @lofa.page on Monday.

However, the video was removed a few hours later.

Netizens also used the hashtag #NLFH, with fans sharing photos of the couple and expressing their well wishes and prayers for the couple.

However, attempts to reach to Neelofa’s team or her family members were unsuccessful.

A programme in conjunction with the fasting month of Ramadan, which was supposed to feature an appearance by Neelofa, was also cancelled at last minute.

A Malay daily had previously claimed that that the couple had married secretly in Kelantan, after Neelofa was alleged to be the “victim of a love potion” given by PU Riz, and that Neelofa had transferred a substantial amount of money to the young preacher.

However, Neelofa had rubbished the talk as mere rumour.

> It was a terrifying moment for three men after they were chased by a huge bear near a forest in Dungun, Terengganu, last Saturday, Utusan Malaysia reported.

The incident took place at about 7am. The trio went to the forest to find food for their livestock when they came across the bear.

One of the victims, Adnan Mamat, 37, said the bear was about 100m when it charged at them.

He said they panicked and fled.

“I’ve been to the forest for more than 15 years as it is near our kampung, and not once I have bumped into the bear. I was terrified as it has huge fangs and claws, ” he said.

“On Sunday, when I was talking with my friends in front of my house, we saw the bear and it was really huge, ” he said. 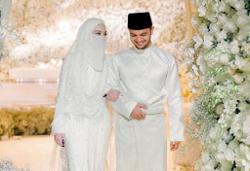