PETALING JAYA: The government has launched the Malaysia Forestry Policy which aims to provide clear directions for the forestry sector in facing new domestic and international challenges.

Prime Minister Tan Sri Muhyiddin Yassin said the policy was agreed upon and accepted at the 78th National Land Council meeting on Jan 29.

"This Malaysia Forestry Policy is our common policy. We must all play a more active role as conservation agents and drivers of the country's socioeconomic development.

"I hope the joint efforts of the Federal Government and state governments in implementing the five objectives of the policy will continue to be strong to achieve the desired targets," he said via a livestream broadcast on Astro Awani.

The policy was launched in conjunction with the International Day of Forests 2021 at the Forest Research Institute Malaysia (FRIM) on Sunday (March 21).

He said this percentage is higher than most European countries including France, Germany, Italy and Britain, noting that of the total forested area in Malaysia, only 1.7% has seen degradation.

Despite this, he said, the government is still committed to responsible and sustainable forest management in implementing restoration programmes.

"This year, the government has provided an allocation of RM34.5mil for the restoration of degradation of forests throughout the country.

"I urge state governments to intensify their efforts to restore the degradation of forest areas through nature-based solutions, especially in environmentally sensitive areas.

"The cost of maintaining and conserving forest areas in Malaysia is also very huge. According to estimates, a total of RM6bil is needed for this purpose," he said.

As such, Muhyiddin said various specialised financial instruments have been created by the government including the Ecological Fiscal Transfer for Biodiversity Conservation, National Natural Resource Conservation Trust Fund and Forest Development Fund Trust Fund under state governments in Peninsular Malaysia.

He said the financial instruments are still not enough to cover the huge allocation needed.

In recognising this, he said, the Cabinet had agreed last year to approve the establishment of the Malaysia Forest Fund (MFF), an entity that will manage financial mechanisms specifically for the forestry sector.

"I am confident that the efforts by MFF will open up opportunities for corporate bodies, private parties and financial institutions to be involved as strategic partners in forest conservation activities," he added.

He pointed out that MFF is expected to bring in funds of US$100mil (RM411mil) over the next seven years to be channelled to state governments for conservation efforts including social forestry, which aims to improve the socioeconomic status of the orang asli and local communities.

He also urged state governments to step up their efforts to gazette and maintain forested areas especially in the Central Forest Spine (CFS) and Heart of Borneo (HoB) ecological corridors.

Meanwhile, Muhyiddin also said the Fourth National Physical Plan (RFN4) which is being finalised would place emphasis on the CFS to ensure the sustainability of the forest landscape by establishing new ecological corridors.

"This approach is able to reduce human and wildlife conflicts as well as enable the free movement of wildlife, especially the country's iconic endangered species.

"If extraordinary actions are not taken now, the country will definitely lose its iconic species, especially the Malayan Tiger, forever.

"Therefore, I urge state governments to take action to gazette the Malayan Tiger habitat area as a permanent forest reserve or wildlife reserve," he said.

Muhyiddin also welcomed the commitment of state governments to increase forest cover under their respective structure plans, adding that strategic cooperation among state governments, the Federal Government and the private sector is important to achieve the targets set.

To support this, Muhyiddin said he had launched the Malaysian Greening Programme: 100 Million Tree Planting Campaign on Jan 5 that has seen more than four million trees of about 400 species planted by various sectors of society including individuals, government organisations and private companies.

He added that state governments have been advised to reduce dependency on forest harvesting activities, and strengthen other ways of tapping on forests such as through the ecotourism, herbal and pharmaceutical industries. 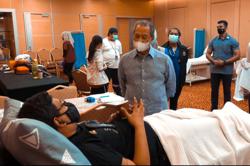