Annuar said he was made to understand “seven or eight more Opposition MPs” may defect to Perikatan in the coming days, citing the government’s “stellar performance in tackling Covid-19”.

“Most importantly, if this government performs, then more will be prepared to support us, ” he told reporters after a walkabout at the Young City Entrepreneurs Kiosk and Anjung Floria in Putrajaya yesterday.

Annuar declined to name the MPs or the parties they are from.

“For me, now is the time to strengthen unity, rather than destabilising (politics). We must work together to address the people’s issues rather than talk about politics all day long, ” he said.

Meanwhile, a senior leader in Perikatan, who declined to be named, claimed that as many as five Opposition MPs from various parties are expected to make their announcements in the “near future”.

“I cannot tell you exactly when – it could be in the next few weeks or in the next few months. These MPs are not only from Pakatan Harapan component parties but also from other Opposition parties.

“They are of different races and said they are not interested in joining any party once they leave the Opposition, but they will support the leadership of Muhyiddin.

“Discussions have been ongoing as far back as last year, as they have approached Perikatan leaders to vent their frustration with the continued bickering among their leaders.

“We are open to accepting anyone whose intention is to serve the rakyat, but we must also be sure that they come in knowing full well that they will not be compensated in any way, ” said the source.

The source added that these Opposition MPs are from Kedah and Perak, and likely also from Sabah.

Some names were given, but the said MPs could not be contacted as at press time.

The source said that boosting lawmakers’ support for the Prime Minister would be vital in ensuring the stability of the Perikatan government until the next general election.

“We have been hearing repeated attempts from those opposing Perikatan to call for a vote of no confidence against Muhyiddin.

“Even after a state of emergency was declared in January by the King, these attempts have continued, ” said the source.

Talk about the ruling and Opposition coalitions both quietly approaching each other’s MPs has been swirling for months.

Azmin, who broke ranks with PKR president Datuk Seri Anwar Ibrahim to lead nine other MPs from the party to help form the Perikatan government, is said to have been instrumental in these latest moves.

The former PKR deputy president’s tweet came half an hour after Kuala Langat MP and former Pakatan minister Datuk Dr Xavier Jayakumar announced his resignation from PKR and declared his support for the government.

On Feb 27, PKR’s Julau MP Larry Sng from Sarawak and Tebrau MP Steven Choong from Johor met with Muhyiddin to declare their support for the Prime Minister after announcing they had resigned from their party to become independent MPs friendly to Perikatan.

“There are a few more who want to join us, especially from Opposition parties. They will join nearer to the general election, ” he told reporters after presenting a mock cheque to DRZ Football Academy in Tanjung Rambutan yesterday.

Asked whether these crossovers were representatives from Perak, the Tambun MP replied, “Nationwide.”

Both Yong and Sivasubramaniam quit DAP to become independents after Perikatan took over the state government last year.

Prior to joining Bersatu, Sivasubramaniam joined Gerakan in June.

Ahmad Faizal, who is also state Perikatan chairman, said there was no single Malay party dominant enough to win a general election and form the Federal Government on its own.

“It is important that we work with other parties. The Perikatan government, with dominant parties like Bersatu, Umno and PAS, are doing all right amid the political, economic and health crises, ” he said.

Meanwhile, DAP announced it had terminated the membership of eight people following a meeting on Wednesday.

“The last and eighth member – Chan – continues to be the assistant of and associate himself with Malim Nawar assemblyman Leong Cheok Keng, whose membership was terminated on the grounds that he has applied to be a member of MCA, ” Chong said in a statement yesterday.

PM: Perikatan is the ‘new deal’ 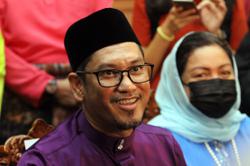