In the works: The construction site for the Johor Baru-Singapore Rapid Transit System (RTS) Link Project’s Bukit Chagar station, with a view of an under construction tower block under Coronation Square, which will be linked to the RTS station. — GLENN GUAN/The Star

JOHOR BARU: The state is slated to boom further by the next five years with the completion of the Rapid Transit System (RTS) Link which will take commuters only five minutes to reach Singapore, says the Ruler of Johor.

Sultan Ibrahim Ibni Almarhum Sultan Iskandar (pic) said he had been informed that the RTS Link was expected to carry up to 300,000 passengers a day.

“It will dramatically put Johor as a strategic link to Singapore on another level.

“Travelling between Johor and Singapore will become much easier and faster. I am looking forward to the RTS, ” he said in an interview in conjunction with Chinese New Year.

His Majesty said the prices of properties would go up as RTS would make living and working in Johor more conducive for both sides.

“There is mutual benefit from RTS as the link will lessen the pressure on space in Singapore. It will further integrate the two communities.

“Johor hopes to offer itself as a technological and medical hub. There is enormous potential, ” he added.

He also said that there would be a stronger boost to the hotel, hospitality and tourism sectors in Johor.

Transport Minister Datuk Seri Dr Wee Ka Siong had said that out of the 4km line connecting Bukit Chagar in Johor Baru and Woodlands in Singapore, an elevated stretch of 2.7km would stand within Malaysian boundary.

The line would go underground as it reached Singapore, said Dr Wee.

The journey time will be only five minutes and during peak hours, trains will commute at an interval of 3.6 minutes.

The Sultan of Johor said the RTS would bring huge economic benefits to Johor and put an end to the long-standing traffic congestion problem at the Causeway.

“There will also be spin-off effects from the construction of the RTS as thousands of jobs will be created for Johoreans, especially local contractors and suppliers, ” he said.

The total cost of the RTS project, which was earlier suspended at Malaysia’s request, is estimated at RM10bil (S$3.24bil).

Both governments have agreed to a split of 61:39, with Malaysia forking out RM3.716bil for the project.

Dr Wee had also said that for the purpose of customs, immigration and quarantine (CIQ) clearance, a new CIQ facility would be built for passengers of the RTS Link, separate from the existing CIQ.

According to the revised bilateral agreements, the depot of the project has been switched from the existing Thomson-East Coast Line Mandai depot in Singapore to a new location in Wadi Hana in Johor Baru.

“This depot is jointly owned by Malaysia and Singapore. It will be cordoned off, a secured area. It’s well protected, ” Dr Wee said.

The RTS Link project was meant to be completed in 2024, but work was suspended.

The suspension was extended three times at Malaysia’s request.

On July 30 last year, Prime Minister Tan Sri Muhyiddin Yassin and his Singaporean counterpart Lee Hsien Loong attended the ceremony at the midway point of the Causeway that marked the resumption of the RTS project.

The project is now slated to be completed by end 2026.

The RTS is located within the Ibrahim International Business District (IIBD) encompassing over 250 acres of the existing Johor Baru city centre, which is poised to become the next economic growth zone.

The IIBD is set to become the catalyst for explosive economic growth, propelling the city as a financial, health and technological hub.

An example of the close working relationship between the state and Singapore is the setting up of a Johor state trade office in the republic.

The state capital is poised to complement Singapore and provide ample land and cheaper workforce for many industries where investors can either live in Johor Baru and commute or even set up their offices in Johor Baru. 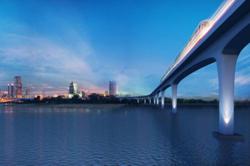