KOTA KINABALU: The Sabah Wildlife Department should carry out a thorough investigation into the allegation that turtle eggs were served at a reunion dinner as seen on social media last week, says Datuk Christina Liew (pic).

The former state tourism, culture and environment minister said the department's enforcement officers should follow up with its investigation into the turtle eggs reportedly served at the dinner of a family linked to a former assemblyman.

"The department must, by all means, trace how the turtle eggs found their way into the family home and ended up on the dining table as part of the menu for a Chinese New Year reunion dinner," she said in a statement on Wednesday (Feb 17).

She said an investigation must be carried out to deter any would-be perpetrators.

"The department's investigation must lead to prosecution and conviction of the alleged offender. No one is above the law," she said.

"I am utterly disappointed that some citizens have absolutely no respect for the law against the possession and consumption of turtle eggs in Sabah.

"To put a stop to this illegal activity, we must beef up the law with stricter enforcement and penalties as the order of the day," Liew said.

Following social media posts highlighting the dinner, Sabah Wildlife Department director Augustine Tuuga said the department was going to investigate the matter although no one had come forward to lodge a report.

A member of the immediate family of a former assemblyman had posted pictures of the reunion dinner on Facebook, with turtle eggs seen on the table.

The picture was taken down a short while later but various groups had already captured screenshots of it and demanded that an investigation be carried out.

Turtles are a totally protected species under Sabah's Wildlife Conservation Enactment 1997, Liew said, adding that it was an offence to possess these animals or their products (shell, meat and eggs).

"Offenders can be fined RM50,000 or jailed five years, or both, upon conviction," said the Tawau MP and Api Api assemblyman. 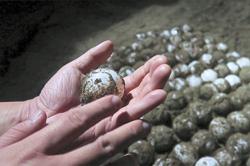