File picture of Pak Mie playing with some of his dogs during an interview at his stray dogs and cats shelter in Alor Setar, Kedah.

ALOR SETAR: The Pak Mie animal shelter for cats and dogs will be moved to a temporary place in Jeragan by the Alor Setar City Council (MBAS).

The council said a sewerage company has agreed to build a temporary shelter on its land as part of the company’s corporate social responsibility programme.

Work on the temporary shelter will begin on Feb 15 and will complete within two days.

The specification on the structure of the shelter will be determined by the Veterinary Department.

"Both the council and the Veterinary Department will move the cats and dogs to the temporary shelter on Feb 18 and 19, ” it said on Friday (Feb 12).

It said each dog would be given a rabies jab by the department with the cost fully borne by MBAS.

This was a decision made by the council in a meeting on Feb 11 chaired by Alor Setar Mayor Datuk Zaid Ahmad and attended by officials of the Veterinary Department, the state Sewerage Department and Badrul Hisham of Pak Mie shelter.

The council said the Pak Mie shelter can manage the temporary shelter until Aug 15 through an agreement with MBAS.

The council welcomes people who are willing to adopt the cats and dogs at the temporary shelter.

She started the animal shelter with her husband Muhammad Azmi Ismail, also known as Pak Mie, since 1990. 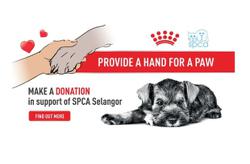