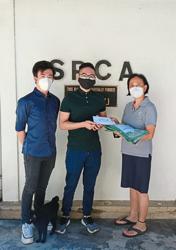 ALOR SETAR: The family of Halijah Idris was dealt a double blow when they were ordered to vacate an animal shelter they were managing on the day Halijah was undergoing surgery.

Halijah's family received the notice to vacate the shelter at Kampung Ganding here on Thursday (Jan 28) on the day she was undergoing a procedure to remove her ovary at Hospital Sultanah Bahiyah after being diagnosed with stage four ovarian cancer.

Halijah, 76, is the widow of independent animal rescuer Muhammad Azmi Ismail, fondly known as Pak Mie, who had died on March 22,2015, after a stroke.

Pak Mie and Halijah had been looking after strays since 1990. Their story came to light when a video of their work went viral in 2013.

Since her husband's death, Halijah, who is fondly known as Mak Intan, took over the care of the animals. She once served in the Malaysian Armed Forces' medical division.

Her son Badrul Hisham Ramli, also known as Sham, 54, said the family has been managing the shelter with more than 500 cats and dogs for more than 10 years.

“I found out that there was a notice issued by the Alor Setar City Council (MBAS) pasted on the entrance of the shelter at about 3.50pm on Thursday.

“At that time, my mother was in the middle of the operation, which was scheduled from 3pm to 10pm on Thursday, and until now, she is still not fully conscious," he said.

Badrul, a retired army personnel, said the notice stated that they were given a week to remove the strays.

“How are we supposed to move on short notice with so many dogs and cats?

"We will appeal to MBAS to postpone the relocation of the animal shelter.

"We also hope corporate bodies, individuals or NGOs will come forward to help us get a temporary unused land to shelter the 380 stray dogs and 180 cats we have," he said when met at the shelter.

Badrul added that his mother did not know about the notice and that he and his siblings were not keen to tell her as they are worried it could worsen her condition.

"Before she was warded, she made us promise that we would safeguard the animal shelter.

"We don't want a big piece of land. We only need about an acre to build a shelter for the cats and dogs.

The family also applied to the Pendang and Pokok Sena district offices for three pieces of land – one in Pokok Sena and two in Pendang to put up the shelter but the local community had voiced their objection.

"Another plot of land was unsuitable as it was too close to a rubbish dumping site," added Badrul.

MBAS mayor Datuk Zaid Ahmad said in a statement that the shelter was located on reserve land in Tanjung Bendahara and had been identified for a regional sewage treatment plant and sewerage pipeline network project, expected to start on Feb 15.

“We received a letter from the Sewerage Services Department seeking MBAS' help to expedite the relocation of the shelter and MBAS has given Halijah until Feb 15 to move.

"If they fail to do so, MBAS will then take over the task of relocating the animals," he said, adding that action could be taken under Section 46 (1) (a) of the Roads, Drainage and Buildings Act 1974 (Act 133) for illegal construction (enclosures for the care of dogs and cats) and causing disturbance.

"They had also initially agreed to move out," he said.