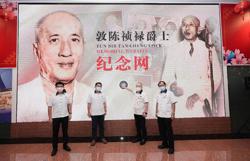 Sharing her story: Low recounting her ordeal at a press conference in Kuala Lumpur.

MALAYSIAN actress Kimmy Low has been getting phone calls harassing her since her contact number was leaked, with one caller claiming to be a rich businessman offering her a huge sum of money to sleep with her, China Press reported.

She lodged two police reports and held a press conference in Kuala Lumpur on Tuesday.

Low, 35, said she was contacted via WhatsApp by a so-called businessman with the surname “Cheng”.

He hinted to her that she would be rewarded if she was willing to go to bed with him.

“My fiance and I felt uneasy after reading (the messages). After discussing this with his parents, we decided that I would continue chatting to find out more about him, ” she said.

Eventually, Cheng realised that the ruse was over and threatened to ruin Low’s reputation.

He claimed to have private information about her parents and asked her for RM50,000 in exchange for his silence, Low said, adding she last heard from him last month.

He was seen wearing a blue face mask during the TVB Anniversary Awards 2020 while most of his colleagues opted for a transparent shield which covered the lower half of their faces.

Chan, 49, said: “Even though the number (of confirmed cases) has fallen, we can’t really afford to relax.”

He was also the only one seen wearing a surgical mask at several recent public events.

> Huazong has urged the government to once again allow for the deferment of loan payments and to provide cash aid to those who have lost their jobs, China Press reported.

“With the recent tightening of restrictions, the government needs to implement policies to support struggling businesses and the rakyat, ” its president Tan Sri Goh Tian Chuan said.

“This is especially true for those forced to stop work, unable to resume work or have zero income such as those in the tourism, hospitality, and entertainment industries, as well as those in the gig economy.”