Bernama chairman Senator Ras Adiba Radzi announced Mokhtar’s appointment as the CEO after a meeting of the news agency’s board of governors Wednesday (Dec 2).

Mokhtar, 59, has been acting CEO since May 17,2020, following the resignation of Nurini Kassim a day earlier.

Ras Adiba said she was confident Mokhtar would be able to bring about a transformation to enable Bernama to shine not only in the Asean region but also in the world.

"We are fortunate that Mokhtar is a person with wide experience, having served the organisation for 35 years.

"This is an achievement and honour for Bernama staff. We must come forward and show everyone we are one, we have the experience, we have the people and we can do it as well. This (appointment) is an inspiration for others to rise and hold high portfolios, ” she said.

She said among the challenges in driving Bernama forward is drawing the younger generation to all Bernama platforms, besides diversifying the social media content in disseminating information to society.

Mokhtar is a Bernama career journalist with 35 years of service to his credit. He began his career in the news agency as a news executive in 1985 and has held various positions, including as Sabah bureau chief and news and current affairs manager (audio-visual service).

Mokhtar expressed gratitude for the trust and confidence placed in him by the Bernama board as well as the Communications and Multimedia Ministry in discharging his responsibilities.

"I am grateful for the huge responsibility of leading Bernama. This is an honour for all Bernama staff. I will work closely with the new chairman and all staff to take the national news agency to greater heights, ” he said. - Bernama 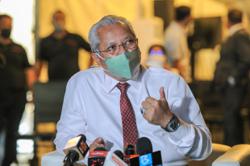