A FARMER was stunned to find a batik python weighing about 110kg near his chicken coop in a village in Dungun, Terengganu.

Mohd Amir Ruslan said the 8m-long snake was found near the fence when he was about to enter the coop on Tuesday, Utusan Malaysia reported.

“At first I thought of letting the snake out with the hope that it would leave for the jungle on its own. However, considering the safety of other workers as well as the possibility of the livestock being eaten, I decided to contact the Civil Department team, ”

Mohd Amir said snakes were often found near the chicken coop as it was located near the forest.

“The size of the reptile made it difficult for them to remove it from the coop.

“This batik python is the largest ever caught this year. It was taken back to the operations room before being handed over to the Wildlife and National Parks Department, ” he said.

Wawa, 29, said it was one of their dreams after the previous plan to build a mosque was achieved.

“We work hard not only for our own comfort but also others. We want to give back to the people.

“However, we have yet to decide on the location of the centre, ” she said.

Wawa said the construction of a mosque would start in December in Aeril’s hometown of Kampung Rengit, Batu Pahat, Johor. 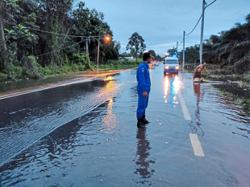