SHAH ALAM: An ex-political aide to a former Pakatan Harapan minister was slapped with another two graft-related charges at the Sessions Court here.

He is charged under Section 16(a) (B) of the Malaysian Anti-Corruption Commission (MACC) Act 2009 for both offences.

If found guilty, he faces a maximum imprisonment of 20 years and a fine of not less than five times the amount of the bribe or RM10,000, whichever is higher.

In the first charge, he is accused of receiving RM50,000 from one Elias Jemadi Tajudin, who is managing director of Aqsa Solution Sdn Bhd.

The alleged bribe was for helping FEHM Entity Sdn Bhd, for which Elias Jemadi is also the managing director, to be chosen as strategic partner and maintenance contractor for the Defence Ministry’s intelligence system.

Mohd Azahar allegedly committed the offence in his official vehicle at the VIP lane at KLIA in August last year.

For the second charge, he is accused of accepting RM80,000 from Elias Jemadi through one Zainudin Abdul Majid who is managing director of Ikaira Resources.

DPP Mahadi Abdul Jumaat asked for bail to be set at RM30,000 with one surety as well as for Mohd Azhar to report himself at the Putrajaya MACC office at the beginning of every month.

Mohd Azahar’s defence counsel Ariff Azami requested the court to set minimum bail given that his client was currently jobless and had a wife, seven children and mother-in-law to support.

Judge Rofiah Mohamad set bail at RM15,000 for both charges and ordered Mohd Azhar to check in at Putrajaya MACC office on the first week of every month. 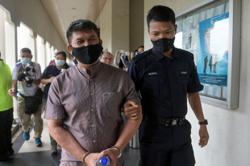