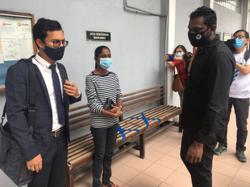 IPOH: The Sessions Court here has set two days in January to hear the case of M. Sugu, the husband of the popular “Sugu Pavithra” cooking duo, who is charged with possessing a sickle at Hospital Raja Permaisuri Bainun.

Judge Norashima Khalid set Jan 11 and 12 for the trial.

Deputy public prosecutor Liyana Zawani Mohd Radzi informed the court that the prosecution had rejected Sugu’s first letter of representation to review the charge of carrying a sickle.

Sugu’s lawyer Syahrul Nizam told the court yesterday that the defence would be submitting a second letter of representation to the prosecution’s headquarters in Putrajaya soon.

He then asked for the court to decide on the trial dates for next year first, while important documents were being prepared for the second representation.

Liyana also requested a mention date to be scheduled before the start of the trial.

“If a mention date is set first, then we will also be able to get the latest update of the application for the second representation as well, ” she added.

Norashima then set Dec 7 for the next mention.

On Sept 17, Sugu was given a discharge not amounting to an acquittal by the same court over a charge of assaulting his wife in July.

His wife, S. Pavithra, in early September submitted a letter to the prosecution to not proceed with the case as she had decided to withdraw the charge made against her husband. However, the charge against Sugu for carrying a sickle remains.

The offence, under Section 6 (1) of the Corrosive and Explosive Substances and Offensive Weapons Act 1958, provides for a maximum of 10 years’ jail, if found guilty.

Sugu, 29, a former estate worker, is alleged to have assaulted Pavithra, 28, with a mobile phone and a sickle at the parking lot of the hospital on the evening of July 21, causing injuries to her lips, left cheek and right arm.

Pavithra and Sugu, who live in Sungai Siput with their two sons, rose to fame with their series of cooking videos under the Sugu Pavithra YouTube channel during the movement control order (MCO) period.

Since then, the channel has attracted over 800,000 subscribers.