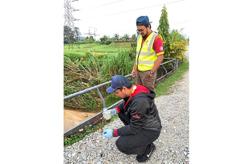 KUALA LUMPUR: Two directors of a machinery repair company are among eight men detained by the police in connection with the latest odour pollution in Sungai Selangor that caused millions of consumers to be hit by another water cut.

All eight suspects are expected to be remanded in a Selayang court today.

Selangor CID chief Senior Asst Comm Datuk Fadzil Ahmat (pic) said the company directors, aged 62 and 31, as well as six workers, including four foreigners, were held at about 11.30am yesterday.

“The company, which specialises in repairing and selling construction machinery, is believed to be behind the contamination, ” he said.

He urged those with information to contact the nearest police station.

He said a preliminary investigation found that solvent was the cause of the odour pollution and it was similar to the incident early last month.

In Shah Alam, Datuk Seri Amirudin Shari said the state government would expedite the removal of factories and manufacturing plants located near riverbanks following the spate of water contamination incidents.

The exercise, said the Mentri Besar, was expected to be completed before December.

He also revealed that there were eight incidents of water pollution in Selangor this year alone.

“That is our intention and we need time for the relocation as some of these factories are legal.”

He said there was a need to find a win-win formula when the affected factories and establishments were legal entities and big contributors to the Selangor economy.

He has directed state executive councillors Ng Tze Han and Hee Loy Sian, who are in charge of local government and environment respectively, to liaise with the local councils regularly for river clean-up activities as well as expedite the relocation of licensed factories currently operating near water sources.

Amirudin brushed aside a question on whether the contamination could be the work of saboteurs.

“I do not wish to speculate, ” he said, adding that the matter was for the authorities to investigate.

The latest fiasco – the third major unscheduled cut in a month – affected some 1.2 million account holders or almost five million consumers in the Klang Valley.

The contamination of Sungai Selangor, which was detected in the early hours of Monday, led to a disruption of water supply to 1,292 areas in Kuala Lumpur, Petaling, Klang, Shah Alam, Kuala Selangor, Hulu Selangor, Gombak and Kuala Langat.

As at noon yesterday, water supply had been restored to about 90% of the affected areas.

Frequent unscheduled water cuts due to contamination of rivers are a bane of Klang Valley consumers.

Association of Water and Energy Research Malaysia president S. Piarapakaran had said that the state government must create a database of all the factories and manufacturing plants that were potential river polluters, and called for serious efforts to be put in place to ensure new ones did not sprout up.