The victim from Bayan Lepas, was pronounced dead by a team of paramedics at the scene.

A Fire and Rescue Department spokesperson said they received a call from the public at about 6.30am, informing about the incident.

"When the rescue team arrived, we found the victim was seated unconsciously at the Middle Station of the hill," he said in a statement.

The spokesperson said checks by paramedics, however, found the victim lifeless.

A team of nine firemen then conducted a size-up at the scene to bring the remains down the hill.

The operation ended at about 8.35am.

The Star is withholding the name of the victim until the family has been notified. 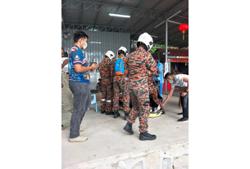 Penang Hill's Unesco application may take one to two years to be approved, says Corp