Exciting polls in the making

Going by the rules: A party supporter getting his temperature scanned during a gathering at Putatan, Sabah. — Bernama

KOTA KINABALU: Blurred political battle lines have been drawn for the 16th Sabah state election as friends and foes face each other in polls that are definitely going to be thrilling and intricate.

Hopes for an eleventh hour compromise between the main Opposition Perikatan Nasional and its allies fell apart while incumbent Warisan Plus, led by caretaker Chief Minister Datuk Seri Mohd Shafie Apdal, is facing its biggest challenge to steer back to power after its 27-month hold on the state was interrupted.

Also emerging as a major force was Parti Cinta Sabah led by former Foreign Minister Datuk Seri Anifah Aman, whose party fielded 73 candidates to become the single largest party contesting all the seats up for grabs.

The presence of LDP and Usno, which are respectively contesting 46 and 47 seats, as well as other smaller parties, making up 16 parties in the race, is set to add even more complexities to the fight.

Among the smaller parties are Parti Harapan Rakyat Sabah, Parti Kerjasama Anak Negeri, Parti Kebangsaan Sabah and Pertubuhan Perpaduan Rakyat Kebangsaan, which will contest between one and five seats in the race.

Also in the fray are 56 independent candidates.

Muhyiddin hinted that Sabah Bersatu chairman Datuk Hajiji Mohd Noor could be chief minister if it was agreed by their partners in the opposition alliance.

The message about Hajiji to be chief minister was misinterpreted by some media but was immediately rectified.

However, in immediate responses as the news broke, both Sabah Barisan chief Datuk Bung Moktar Radin and Umno president Datuk Seri Ahmad Zahid Hamidi felt that the chief minister’s post would be decided after the Sept 26 polls.

As Nomination Day came to an end, it was clear that Barisan and its Perikatan friends were colliding with each other.

Bung, Sabah STAR’s Datuk Dr Jeffrey Kitingan and PBS’ Datuk Seri Dr Maximus Ongkili did not back off despite attempts by Perikatan leaders to avoid contests among themselves.

All three parties fielded candidates for the Paginatan seat in Ranau along the foothills of Mount Kinabalu.

According to some Opposition leaders, there were still attempts to get some of the candidates to “withdraw” although their names would remain in the ballot papers.

Sabah will see a total of 447 candidates chasing 73 seats in which each of them had to pay an RM5,000 deposit and a further RM3,000 to remove campaign materials after the polls. Only one aspiring candidate was rejected due to bankruptcy.

Not a single seat will see a straight fight, with the minimum being three-cornered to a maximum of 11-cornered contests.

The next two weeks will be a trying period for all the candidates to win the hearts and minds of 1,124,598 voters. 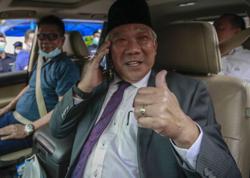