In the Excellent Investigative Journalism category, The Star's R.AGE deputy executive editor and producer Ian Yee and journalist Shanjeev Reddy stood out and won RM10,000, a trophy and certificate.

Editorial artist Tung Eng Hwa bagged the Best Frontpage Design with his works titled ''New efforts to give life'', ''I am 18, will you let me vote?'' and ''Not above the law''.

Tung, who is the senior manager of The Star's Content Design & Creative department, said it was a happy occasion for his department as his colleague, chief designer Mohd Izudin Ismail, also bagged two consolation prizes in the Best Infographic and Best Frontpage Design categories.

''It is an honour to win this award again after four years, knowing that my works catch the eyes of the judges.

''Also, winning this prize during this challenging time is very meaningful. I am thankful to MPI and everyone who has helped to make this happen,'' he said.

The Star and the R.AGE team also bagged consolation prizes in seven other categories with the winners walking away with RM1,000, trophies and certificates.

THE MPI-Petronas Malaysian Journalism Awards was postponed in April due to the movement control order (MCO).

This year, a Special Jury Award was created and it was presented to veteran journalist Datuk Ahmad A. Talib who died in May.

The daughter of the former director of News and Editorial Operations at Media Prima, Sophia Ahmad, received the award.

Guest of honour Education Minister Dr Mohd Radzi Md Jidin who represented Prime Minister Tan Sri Muhyiddin Yassin said journalism and keeping abreast with the news is something close to home as he would flip the newspaper his father subscribed at home daily since he was young.

He said it was important for journalists to uphold the core values of journalism - integrity, authenticity and relevance by presenting content that the people can rely on.

''Journalism has changed and broadened its definition following the involvement of citizens who also share all sorts of information.

''We have seen that the threshold in validating information among the media has changed in recent years and this can affect the quality of journalism.

''Journalists will have to take on new approaches in presenting content in order to remain relevant,'' he said. 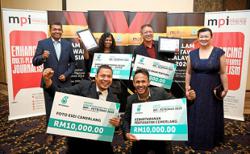 Media industry award to be held next month