This brings the total number of cases in the country to 9,296 since the outbreak began, said Health director-general Tan Sri Dr Noor Hisham Abdullah.

All the local cases involved Malaysians in Melaka, of which two were detected from screening conducted on pre-surgeries at the Terendak Camp military hospital.

Another case was detected from screening on symptomatic cases at the same hospital.

On the import cases, both were Malaysians who had returned from the Philippines and Egypt.

The total number of active cases in the country is now down to 177 cases.

Eight people have been admitted into intensive care units, with six of them requiring ventilator support.

No deaths were reported which means the country’s death toll remained at 125, or 1.35% of the fatality rate.

The last date Malaysia saw a death related to Covid-19 was July 31. 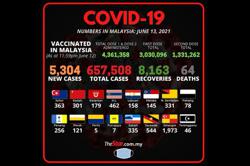