KUALA LUMPUR: Pastor Joshua Hilmy was sent emails warning him about his conduct before he disappeared in November 2016.

A Human Rights Commission of Malaysia (Suhakam) inquiry into the disappearance of Joshua and his wife Ruth Sitepu were shown these emails on Wednesday (Aug 12).

"Don't blame me if you are detained by them. I have done my job by contacting you," read an excerpt from an email.

The sender also said that he had no time to entertain “stubborn people” like Joshua and it was better if he left the country.

Joshua was also called a “fake pastor” in the email.

The email was one in a thread of several emails in November 2015, some which were signed by someone calling himself "Khairy".

The emails were sent by someone who used the moniker "Wifi Gurl" and a web-based email account.

Another letter to Joshua, which included the national coat of arms, warned Joshua that he would regret his negative attitude and that he could not be tolerated.

Both observers from the Bar Council and police questioned the authenticity of the letter.

The printout of the letter and emails were among the items presented at the inquiry.

They were retrieved from Joshua's home in Kampung Tunku, Petaling Jaya by Josiahnandan Emmanuel Peter and his sister Grace back in April 2017 when they were shifting back to their home in Klang.

Josiahnandan, 25, who was the third witness in the inquiry, had stayed in Joshua's house for about three years.

"We took the documents in case something happened to him," he told the inquiry.

He added that he knew that Joshua was baptising others and could get into trouble for doing so as he was a Malay.

Josiahnandan handed over the items, which included official and unofficial documents, bibles, and certificates to lawyer Philip Koh in February this year.

Ruth, who is Indonesian, was reported missing along with her Malaysian husband, Joshua, a pastor, back in 2016.

Ruth's family said she had not responded to any of their messages or calls since November 2016.

Suhakam had initiated investigations in connection with the disappearances under Section 12(1) of the Human Rights Commission of Malaysia Act.

The hearings commenced from Feb 18 at Suhakam headquarters in Kuala Lumpur before they were halted in March.

The couple were said to have married according to Batak customs in 2006 before moving to Malaysia a year later.

In April of last year, a Suhakam inquiry concluded that Pastor Raymond Koh and Amri Che Mat were victims of "enforced disappearance by state agents".

In announcing the findings of the public inquiry on April 3, Suhakam had said that there was "direct and circumstantial evidence which proves, on the balance of probabilities, that he was abducted by state agents, by Special Branch, Bukit Aman." 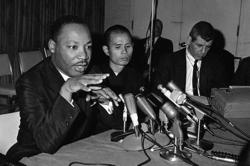